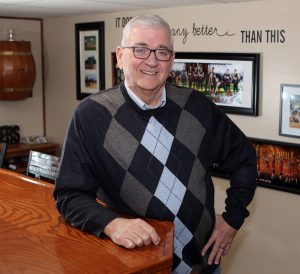 Dick McDaniel is on the road to recovery after getting seriously ill with COVID-19 and pneumonia, but the experience left him with a greater sense of gratitude.

He was hospitalized for nine days in November at Sarah Bush Lincoln and then monitored for another 16 days in the Health Center’s COVID-19 at Home program. While Dick is still regaining his strength nearly three months later, he is grateful for the attentive care that is helping him return to his active lifestyle.

“I’ve had triple bypass surgery, a stent put in, and my gall bladder taken out, but nothing compared to this illness, where no one knows what to expect,” the 65-year-old law enforcement veteran said. “Everyone has just been so amazing. I call the nurses and caregivers the ‘angels of healthcare’ because they were phenomenal.”

Dick’s journey with COVID-19 started with breathing difficulty. Two days after testing positive for the virus, his wife, Gayla, drove him to the Emergency Department at Sarah Bush Lincoln as his condition worsened. “I was having uncontrollable coughing spells, difficulty breathing, extreme headaches and fatigue,” he said. Doctors immediately isolated Dick due to his positive test and eliminated potential heart issues before treating him for COVID-19. His oxygen level was extremely low, so he was admitted and put on oxygen right away.

As Dick’s need for oxygen continued to increase, his oxygen intake levels had to be repeatedly raised to help him breathe. “I could not keep my oxygen up and they kept having to raise it daily, if not more than once a day, trying to build up the oxygen level in my body,” he said. “I spent days lying there just gasping for breath. I just couldn’t get my breath back.” Dick was also diagnosed with pneumonia and treated with medication for both conditions.

A family man at heart, Dick found being separated from his loved ones difficult. Dick worried about his wife, Gayla, of 47 years, as she had also developed COVID-19 and was recovering at home. “We texted back and forth, but it was difficult knowing that she was at home with COVID and there wasn’t anything I could do about it,” he said. “There were a couple of days when I was in the hospital that I truly felt I wouldn’t come home.”

Dick is grateful to nurses and caregivers who went out of their way to make him comfortable. “I had no appetite, no taste, and they tried everything to get me to eat something. When I left the hospital I had lost more than 30 pounds,” he said. “The nurses treated me like I was their grandpa, and that was so comforting. No matter how bad I felt, I could tell they were genuinely trying their best to help.”

By day nine, Dick had shown enough improvement that his doctor approached him about continuing his recovery with assistance from the Health Center’s COVID-19 at Home program. Dick appreciated the doctor’s reassurance that he would only be released if he felt ready and that his condition would be monitored daily by a health professional. “I was breathing more normally, but I knew that I had to have oxygen. There wasn’t any question about it. It was a little scary because this was the first time I’ve ever had to depend on oxygen to function, and I didn’t know how I would handle it,” he said.

The COVID-19 at Home program is for people that can manage their symptoms at home with a little help. Dick received a care kit including a thermometer, pulse oxygenation finger monitor, and instructions on how to manage his symptoms. He also received telemedicine visits daily from nurse practitioner Megan Steffen, APRN, a COVID-19 at Home program leader, who thoroughly monitored his progress.

“It got to the point where Dick would look forward to her daily calls because it put his mind at ease so much,” Gayla said. “She was so attentive to every little detail, and it gave him peace of mind so he could concentrate on healing.”

Dick added, “This program gave such a personal touch to recovery – more than you ever receive going to the doctor every week – and I truly believe it expedited my healing process. It was so comforting to know that I would have the opportunity to discuss any problems with Megan the next day, and she would talk to me as long as necessary to cover my medical and physical health conditions. I never felt rushed, and I developed a bond of comfort with Megan that I was going to be well taken care. I’m forever grateful.”

Dick was also touched by the unwavering support he received from family and friends, and he was thrilled to reconnect with some of them when he resumed his duties as a security officer at the Coles County Courthouse on Feb. 1.

Today, Dick only needs oxygen when he physically exerts himself and when he’s sleeping, but he hopes that’s just temporary. “I plan to make a full recovery, but it will take a little more time,” he said. He is now under the care of a pulmonologist.

Dick’s final hope is that people understand the gravity of this virus and protect themselves. Despite his prior heart trouble, he was extremely active with no physical limitations before getting sick. “I got some form of exercise everyday and I was very active with my grandchildren. I cut down trees and lifted weights, not knowing that days later I wouldn’t be able to walk across a room without collapsing. That’s how serious this can be,” he said.

“Never in a million years would I have suspected that this disease would hit me out of the blue and cause me to be in such a condition that I was scared for my life. I tell my family and friends to please take COVID-19 seriously,” he stressed. “I truly believe it can kill you if you don’t protect and take care of yourself.”

As infection rates decline in the area, SBL COVID-19 at Home Nurse Practitioner Megan Steffen, APRN, urges people not to let their guard down.

“My hope is that people are getting vaccinated and they’re being smart and they continue to do the right thing with social distancing and people that have symptoms are being seen and being tested,” she said.

Since November, Steffen has been caring for people who are recovering from COVID-19 at home after being in the hospital or Emergency Department at Sarah Bush Lincoln. Physician Assistant Nick Watkins, PA-C, joined her as a COVID-19 at Home medical provider six weeks later as the number of people needing care kept rising at the time.

While numbers are thankfully declining, “I want people to know that this is serious,” Steffen said. “I have treated patients in their 20s all the way up to their 90s and it has been serious for all of them. And even though it doesn’t have as high a death rate as we originally thought, that doesn’t mean some of these patients won’t have long-term affects.”

Steffen estimates that the program has helped more than 130 people recover from coronavirus in the comfort of their home. She and Watkins check in with patients every day over the phone or through Zoom to help them manage their illness. Patients are given a care kit, including a thermometer, pulse oxygenation finger monitor, and instructions on how to manage symptoms.

The program is important because it “bridges the continuum of care” from inpatient to outpatient, Steffen explained. However, she and Watkins are quick to send people back to the hospital if their symptoms worsen. Daily telemedicine calls continue for as long as necessary, but average around seven to 10 days or until the patient sees their primary care provider.

“This has been a great program because I feel like I’ve touched so many people’s lives in a time when they’re scared and they’re sick,” Steffen said.  “You develop a bond with patients that are ill and it’s been an honor to treat them.”

She adds, “I want people to know that this is a big deal. I have had patients that I’ve lost and their families will tell you that it’s a big deal. I can’t stress that enough and if people are eligible to get the vaccination, I hope they do.” 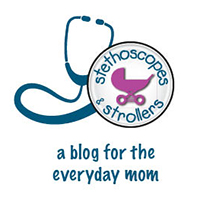